Where to Stay in Nevada: The Silver State's Best Hotels

From Las Vegas to Reno, Great Basin National Park to Tonopah, The Silver State — the seventh-largest in the union — offers plenty to see and do. Whether you're heading to Sin City for a boisterous weekend or embarking nature-filled road trip across the Loneliest Road in America, choosing where to rest your head at night can be challenging. Below, our favorite hotels and resorts across the state.

The Neon Capital of the World needs no introduction. With so many over-the-top resorts to choose from, deciding where to retreat from the endless partying is daunting. Here are our top picks.

All 293 plush residential-style rooms and suites at the NoMad Las Vegas are perched on the top four floors of the Park MGM. As soon as you exit the elevator, it feels as though you've been whisked away to a sky-high oasis. That's not to say the Vegas vibrancy is inaccessible from this hotel-within-a-hotel. Back on the ground level, the spacious-yet-cozy NoMad Bar is ideal for a pre-game or nightcap cocktail. Plus, just around the corner, you'll find the sprawling Park MGM casino – the first smoke-free gaming space in Sin City.

The Cosmopolitan feels like a city within a city thanks to its international crowds of 24-hour partiers and gamers. The vibe is swanky and sexy, minus the pretentiousness. Best of all, unlike other upscale on-the-Strip hotels and resorts, you can score a room here that won't break the bank. Depending on the season, nightly rates range from $150 to $300, even with the notorious Las Vegas resort fees tacked on.

You can't go wrong with a stay at the luxe Wynn Las Vegas, but the suites at the Encore feel extra special — and spacious. Each is decked out with floor-to-ceiling windows, at least two flat-screen TVs, a living room with a mini-bar, and a separate work area perfect for a bleisure trip. For the ultimate posh daytime pool party, book a cushy cabana or daybed and sip bubbly as you groove to the beats of world-renowned DJs like David Guetta and Diplo. 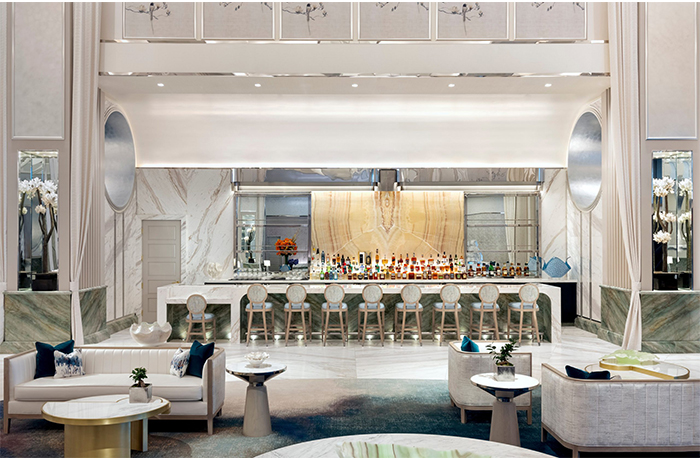 With more than 40 restaurants, bars, and food experiences, a sprawling poolside day club, celebrity residencies (including Katy Perry and Luke Bryan), and a tranquil spa, the massive new Resorts World Las Vegas is a destination unto itself. Guests have three hotels to choose from within the resort, including the Conrad Las Vegas. The largest Conrad property in the world is home to nearly 1,500 stylish rooms with sweeping views of the city.

Imagine the modern stylings of a Virgin Hotel paired with the benefits of the Hiltons Honors program, and you have yourself this centrally located property, which is mere minutes away from the Strip and airport. Take a dip in the desert oasis-themed pool, try your luck at the 60,000 square-foot Mohegan Sun Casino, and relax in one of the 1,500-plus accommodations spread across three towers. Plus, with over a dozen culinary and beverage experiences — including Nobu, Todd English's Olives, and Commons Club — Virgin Hotels holds its own in Las Vegas' ever-growing dining scene.

Rush Tower at The Golden Nugget

For a stay in the heart of Downtown Vegas, right in the center of all the Fremont Street Experience action, look no further than the Golden Nugget. The Rush Tower, the newest of the hotel's four towers, offers surprisingly spacious, upscale rooms and suites. We'd also be remiss not to mention the old-school buzz of the hotel's casino and the hypnotic aquarium views, which are best enjoyed from the bar at Chart House restaurant.

Beyond the casinos and the incredible cerulean waters of Lake Tahoe, Reno is known as "The Biggest Little City in the World" for good reason: public art abounds, bohemian shops are aplenty, and emerging music and foodie scenes have in-the-know visitors coming back for more. From the mountainside to the city center, this region offers an excellent array of lodging.

A nod to General Jesse Lee Reno, whom Reno is named after, the history of this independent hotel dates to 1907 when it opened as the Royal Hotel. Today, the property offers a small design-centric alternative — a refreshing and welcome change from the city's large hotels and resorts. Six distinctively designed guest rooms welcome travelers from all over the country. Meanwhile, both locals and guests can be found mingling at either the ground floor bar and lounge, the outdoor patio space, or the Mezcal-focused restaurant, Estella. 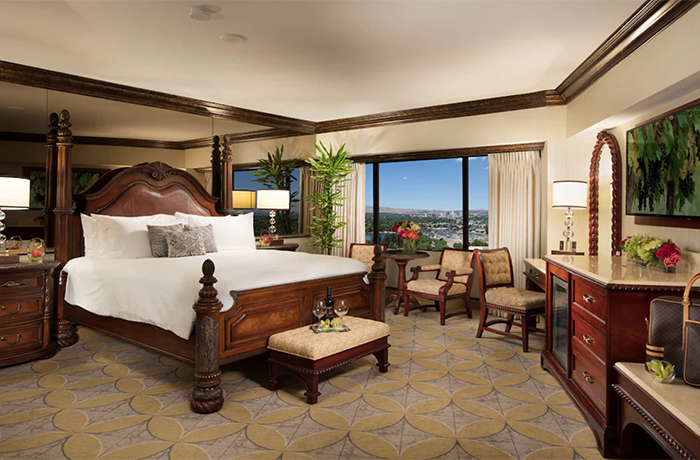 Vegas aficionados may recognize the name from the wonderfully eclectic Peppermill Restaurant & Fireside Lounge, but this Tuscan-themed resort feels worlds away. Peppermill Reno is an eco-conscious property with plenty to boast about: Over 1,600 rooms, including 600 suites; a 33,000-square-foot spa; an 82,000 square-foot casino; a 9,900 square-foot fitness center; nine drinking and dining options; and two pools.

Nestled in the Sierra Nevada mountains on the north shore of Lake Tahoe, the Hyatt Regency is a relaxing respite. Amenities include an on-site spa, a seasonal outdoor swimming pool, and fireside dining at the Lone Eagle Grille. Take your pick of an array of accommodations, ranging from standard rooms to private waterfront cottages.

Halfway between Reno and Las Vegas lies Tonopah, which looks as if it was plucked straight out of a Western film. Its heyday, born around a silver mining boom, ran from 1900 to the Great Depression; however, over the last decade, the seat of Nye County has seen a revitalization. While many may pass through to catch a glimpse of the irksome World-Famous Clown Motel, the Tonopah Historic Mining Park, the Tonopah Stargazing Park — and the wonderfully restored Mizpah and Belvada hotels — make this town well worth a proper visit.

Upon its initial opening in 1907, Mizpah Hotel was considered one of the first luxury hotels in the entire state of Nevada. 92 years later, after mining booms and busts and population ebbs and flows, the hotel closed its doors. Then, in 2011, after a meticulous renovation, owners Fred and Nancy Cline reopened the hotel, a catalyst for the reinvigoration of historic Tonopah. Bespoke accommodation options include three special themed suites. Also, guests and visitors will both enjoy the charming gaming hall and classic American cuisine at the Pittman Café.

In 1906, The Nevada State Bank & Trust building opened on Main Street. Over a hundred years later — after being home to one of the ten best bars in the USA in 1910, weathering through the Great Depression, and sitting idle to the point of complete dilapidation — California vintners Fred and Nancy Cline purchased the property for $1. In 2020, after an intensive three-year, top-to-bottom renovation, Belvada Hotel was ready to open up its doors once more. From the bright and airy lobby to the grand staircase and 40 rooms, The Belvada honors its Classical Revival style and history while offering guests all the modern luxuries expected from a 21st-century boutique hotel.

What could be creepier than sleeping in a motel next to an old mining cemetery? Sleeping in a clown-themed motel next to an old mining cemetery. For those too scared to stay overnight, owner Vijay Mehar is wonderfully friendly and welcoming to passersby looking for a photo opp. Be sure to pop in the lobby, which doubles as the Clown Museum, with over 3,000 clown figurines, toys, and trinkets on display.

Great Basin National Park beckons travelers with The Silver State's largest cave system, ancient bristlecone pine, Nevada's second tallest mountain peak, incredible stargazing, and — best of all — very few crowds. The camping here is top-notch, too. For those who prefer not to rough it, most of the area's hotels are clustered an hour's drive away in Ely.

This highly accessible, pet-friendly hotel is downright charming. Have a go in the gaming hall (where this writer won $400 on a Jurassic Park slot machine!), chow down on hefty portions at Margarita's Authentic Mexican Restaurant & Steakhouse, shop for hand-crafted Native American goods in the gift store, take a dip in the indoor pool, then enjoy a good night's rest in the comfortable guest rooms.

When it opened in 1929, Hotel Nevada (the Gambling Hall was added in 1931 when gambling became legal in Nevada) was the tallest building in the state. In the 1930s, a mural of a donkey dressed like a cowboy was painted on the building's exterior. Today, the state-landmarked hotel offers 64 recently renovated rooms and suites, wifi, a full-service bar, and slot machines. It's also home to downtown Ely's only 24-hour restaurant, Denny's.

Tucked away in the foothills of eastern Nevada, Hidden Canyon Retreat is one of the only full-service accommodation options near the eastern border of Great Basin National Park. South Fork and Big Wash Fork, two of the park's best hiking trails, are both accessible from the 375-acre ranch. Standard rooms come with a kitchenette and provisions may be purchased at the small on-site market. It's worth noting that this property is closed in the off-season, from early November until late March.

Aside from small towns like Pioche and Caliente, the Central Region of Nevada feels absolutely desolate — and that's a good thing! Of the many State Parks clustered in this area, Cathedral Gorge is hands-down a must-see. After hiking through the otherworldly slot canyons, spires, and an old gazebo, try to catch some shut-eye at one of the most notoriously haunted hotels.

You may recognize the Overland Hotel & Saloon from an episode of Ghost Adventures, which depicts successful contact with spirits rumored to haunt the hotel. However, the real-life experience is much less eerie. Each room has its own unique theme, and many offer a cozy living room space along with plush beds. Even if you're just passing through Pioche, a stop at the unabashedly western saloon is a must.

Untamed wilderness in the Ruby Mountains and classic sagebrush saloons — historic bars that will have you feeling like you're in a Wild Western film — await in northeastern Nevada. Elko, the region's largest town, is over 5,000 feet above sea level and offers authentic western charm. Accommodation options are far and few between, leaving plenty of wide-open spaces to explore.

At an elevation of 7,000 feet, Ruby 360 Lodge has beckoned outdoor adventurers with a luxury pedigree to the Ruby Mountains. The Ruby family welcomes visitors with all-inclusive summer and winter packages and serves as an excellent home base for helicopter skiing operations in northeast Nevada. The lodge offers ten well-appointed rooms and two yurts.

For 60 years, this working horse and cattle ranch has welcomed visitors to its rustic guest lodge. On-site activities include horseback riding, roping, arrowhead hunting, fishing, birding, and a hot tub to relax at the end of an excellent day well spent enjoying the outdoors.

Want to take that trip for free — and score some valuable miles for your next excursion? Check out our top pick travel credit cards for the best welcome bonuses, perks, and plenty of cash back.

See Next Article >
Find The Best Cruises
Find a cruise